We have been transporting RVs for right at 2 years now and we were always going to Dan’s Hitch to get things added to our truck and would stay at the Travel Lodge and would eat at either the Perkins in the adjoining parking lot or the Cracker Barrel across the street.

We recently seen a billboard coming off the 80 toll road with a breakfast special and today we decided to go in and check it out on a Sunday.  While they do have a breakfast special, it is only available Monday thru Friday from Open until 10am excluding holidays.  The breakfast special seemed like an awesome deal for a new transporter coming into Elkhart on a budget waiting for orientation or their first dispatch.  for $3.99 you have four choices to choose from.

Our thoughts of why are we telling you about this restaurant? well, after seeing the breakfast deal, we know a lot of new transporters as well as current transporters are always going to Dan’s hitch and have very few choices, they can sit in the drivers lounge for what could be a few minutes to several hours depending on what they are having done or they can hop over to one of the three or four restaurants in the close proximity walking distance. there are also several restaurants over the bridge if anyone wants to exercise and walk a little further.

We decided to try out the Tradewinds and we were very happy with our visit.  the restaurant is more of a mom and pop style vs corporate vibe, the staff were not only very friendly but kept checking on us even after we got our food for anything we might have needed. Many of you know, typically when your food arrives you are forgotten until they bring you the check.

Tom order the country fried steak, eggs over easy, hashbrowns and pancakes for $10.99 and  Bunny ordered the Biscuits and Gravy for $3.99  Toms meal was spot on and we would 100% recommend it to anyone.  because we travel transporting RVs we have become somewhat of a Biscuit snob with home made biscuits around the nation, the Tradewinds were more pre packaged biscuits, while not bad we were expecting a little more from a mom and pop but the price was great and it was still fine. We just didn’t want to get our southern readers all excited and call us out! haha

The menu was huge so the options were plentiful, so if your not a big breakfast fan they have many options for everyone.   We took photos of all the pages of the menu so you can look it over before you go.

For anyone looking for a nice place to get Beer, Wine or Spirits, next to the Tradewinds is the Galley Sports Pub owned by the same owners.  We were told that anyone ordering food while at the Galley Pub received the same exact foods as served in the Tradewinds as the restaurant kitchen was shared kitchen for both places and that the people could expect the same quality as a sit down restaurant.

Yes, as mentioned there are the Perkins and Cracker Barrel that everyone could see when turning in to go to Dan’s Hitch, but this little out of the spot gem was worthy of us taking a few minutes to tell everyone that it is an option and should be on their list to check out when in the area for great food, inexpensive prices and friendly service. 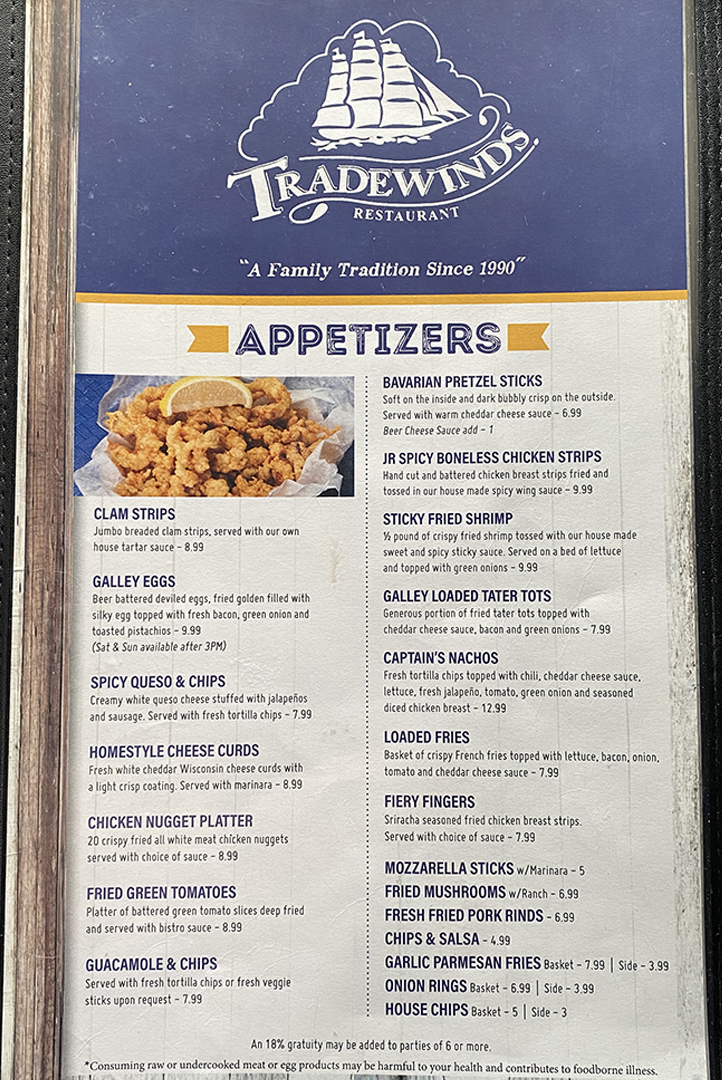 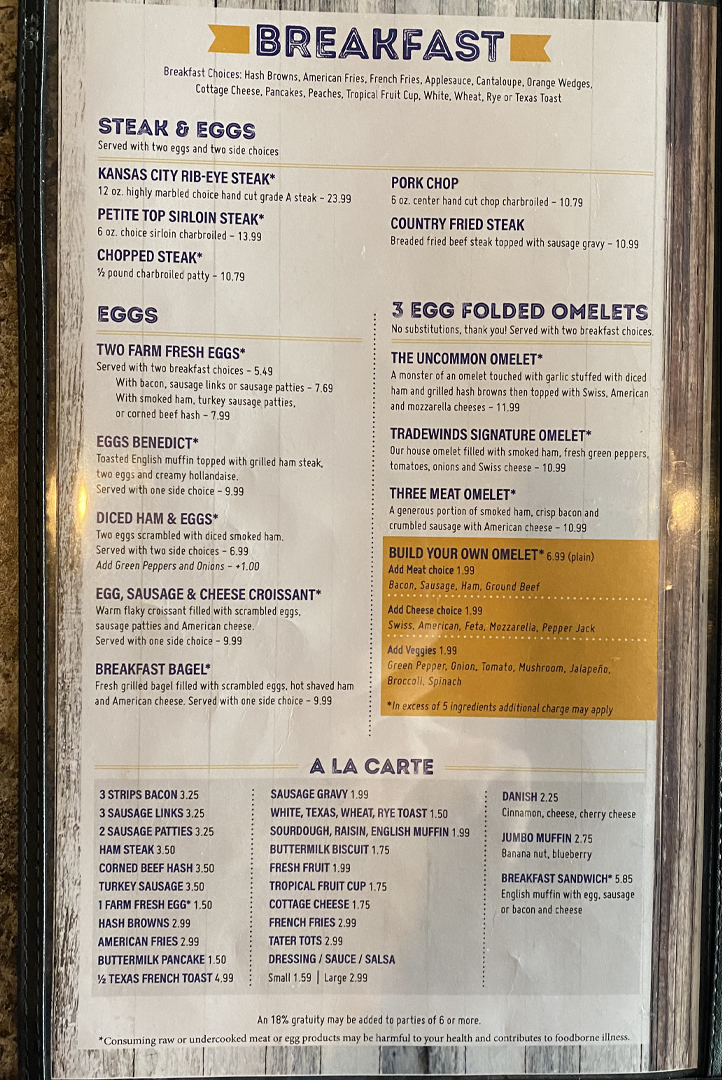 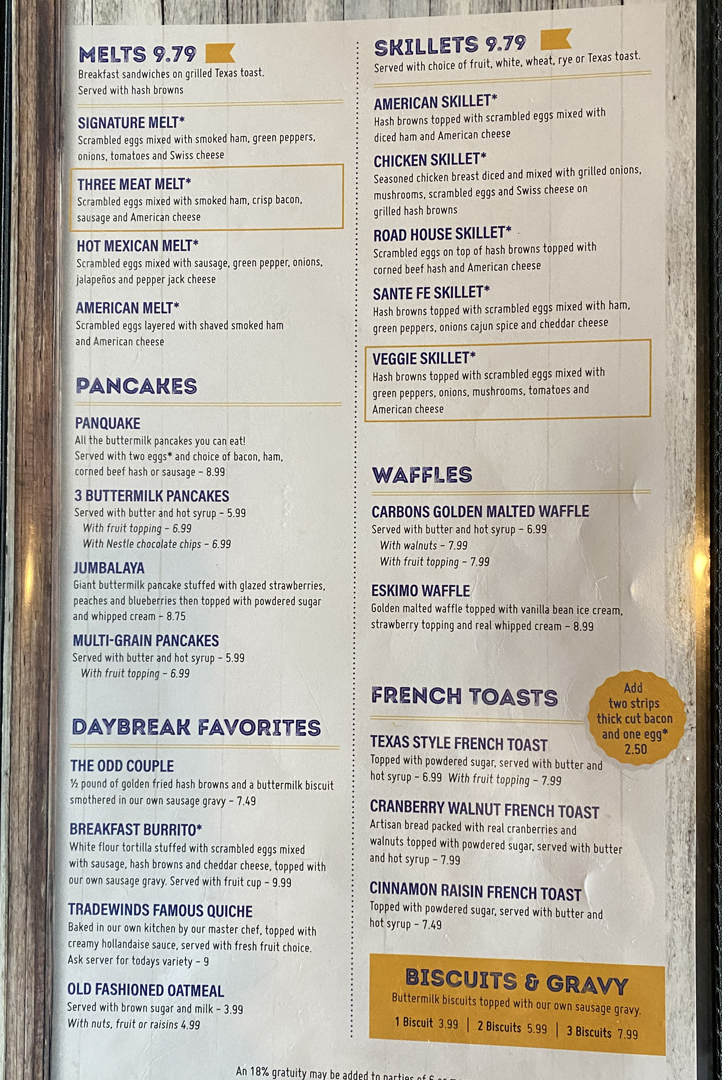 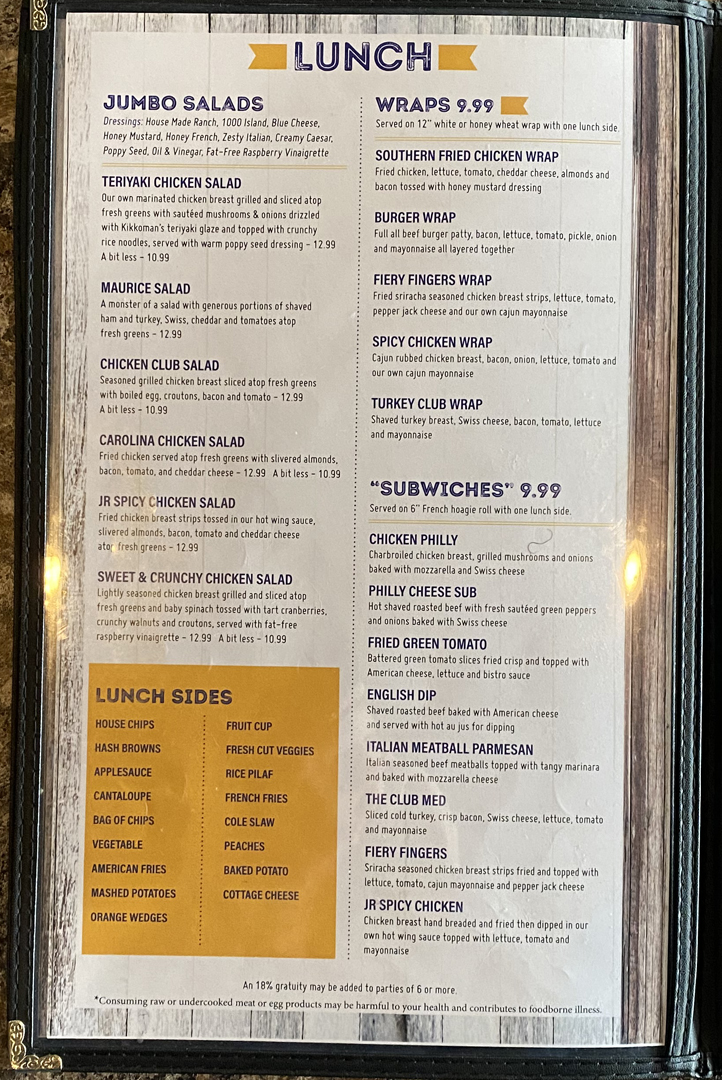 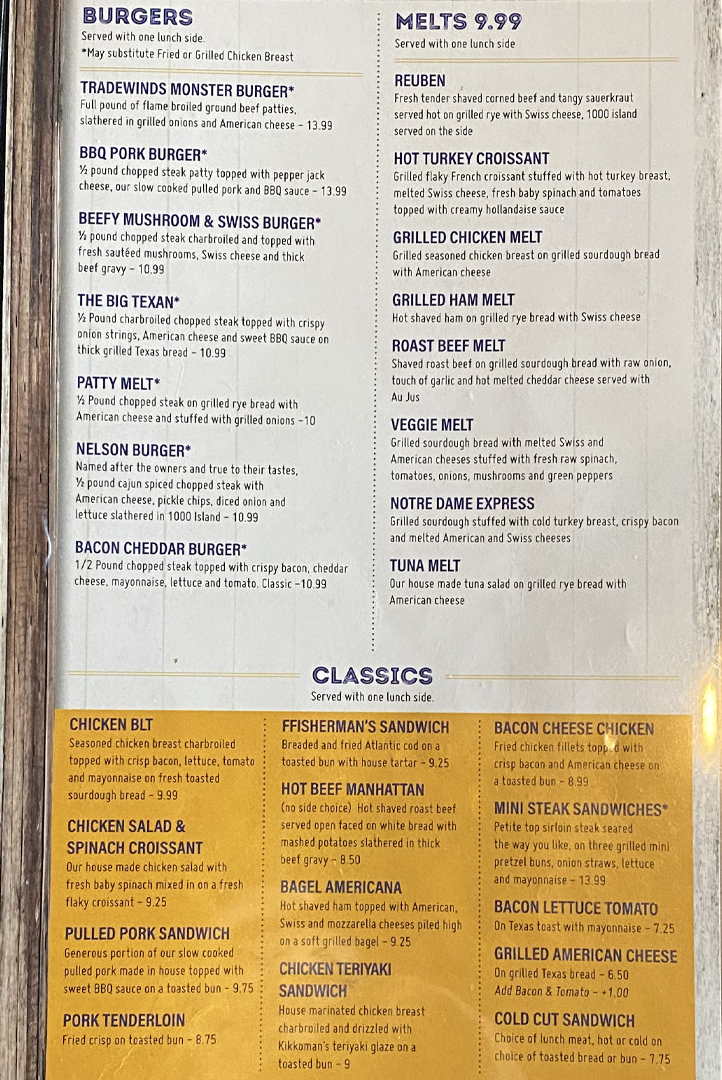 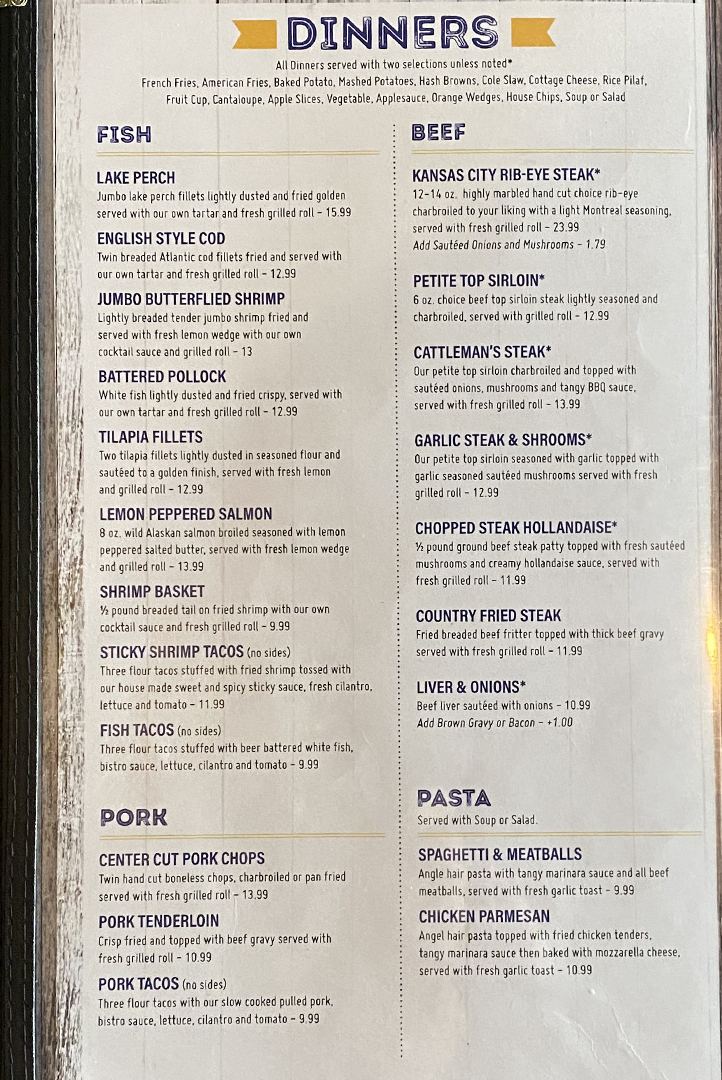 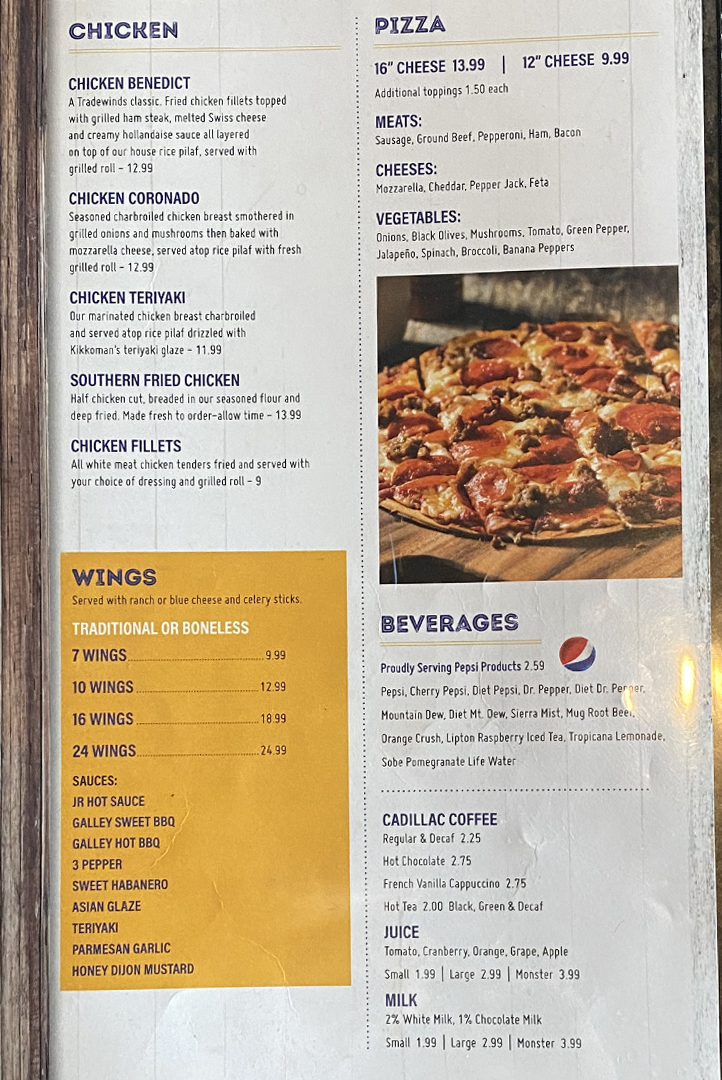 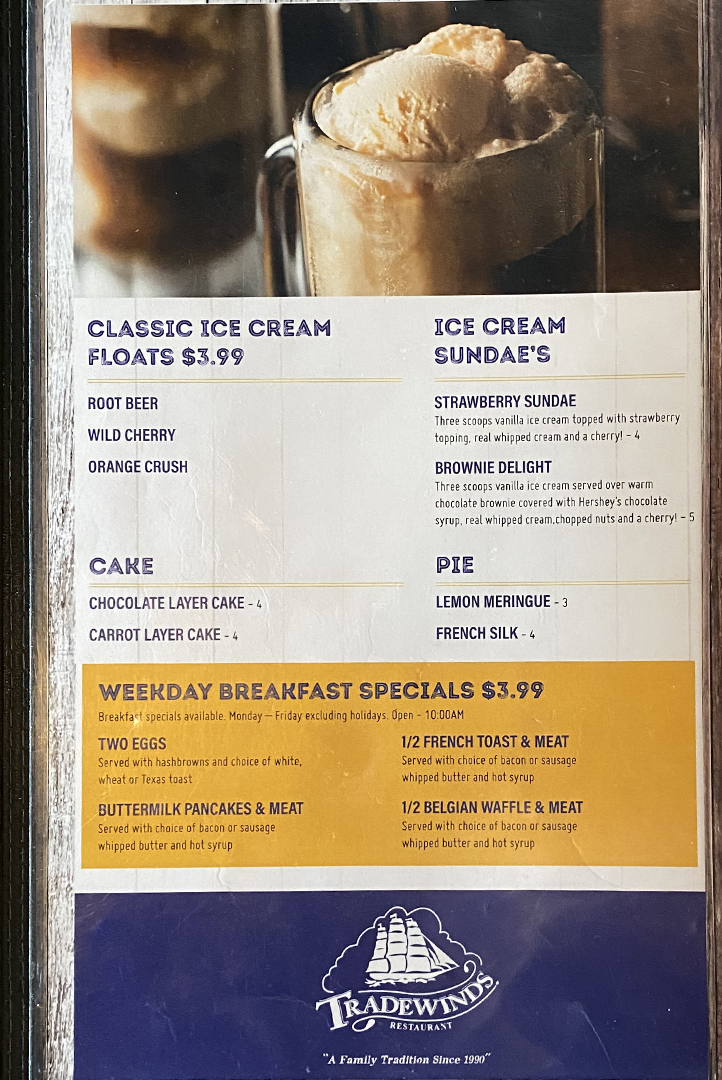